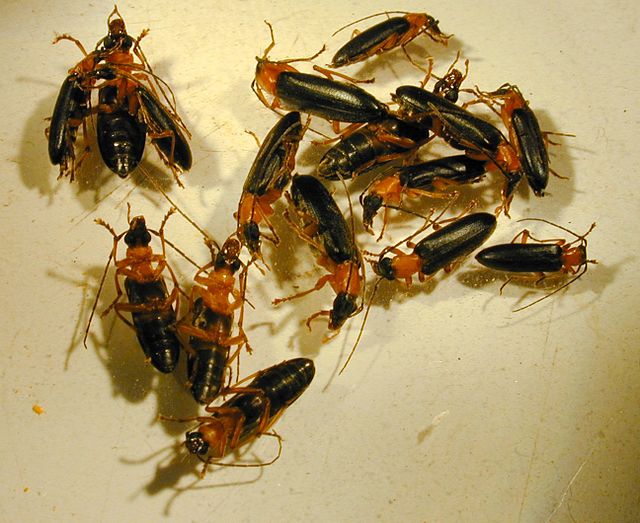 This pest is widespread

At certain times of the year, you may notice these tiny black and red beetles creeping into your home. Some may only notice a few, but others may feel like a swarm is invading! These uninvited visitors are called false blister beetles. There are a few different species here in Hawaii, with Ananca bicolor being one of the most common. They are about 1 cm long with an orangey-red thorax and black head and abdomen. They are nocturnal and are very attracted to lights. Although they are an introduced species to Hawaii from Polynesia, they aren’t considered an invasive species because they don’t cause significant harm to the environment, the economy, or human health. However, they can be very irritating, and questions about false blister beetles come into BIISC very often at this time!

“False” blister beetles are in the family Oedemeridae, which is simply a different taxonomic group than other blister beetles. They are grouped differently only because of their body shapes – there is nothing “false” about the blisters they can cause! Their bodies contain a substance that is a skin irritant, and any bruising to the beetle’s body could cause a release of the fluid that will, in turn, produce a small but mildly painful blister. Some people have reported waking up with blisters after accidentally crushing bugs while sleeping, or they may notice a blister after swiping the bug off an arm or leg. The sensitivity to false blister beetle “juices” varies from person to person, but everyone should take care when handling them. Use a napkin or gloves when disposing of them, or blow them gently if they land on you, rather than swatting.

Getting Rid of False Blister Beetles

As pollen feeders, the adults tend to swell in numbers in the spring and summer when their food source is most available. These beetles emerge together and seem to invade homes in large numbers, but this phenomenon lasts for only a short time. This beetle has a short life span and tends to die off fairly quickly. Below are a few things you can do to mitigate their numbers while you wait for the larger population to fade. While these methods won’t control 100% of the beetles, they will help reduce the amount you come in contact with.

They are attracted to light, so during their active times, it is best to turn off all lights in rooms you aren’t using. Utilize curtains and blinds as much as you can to discourage light from attracting the bugs from outside. Turn on a bright outside light in an unoccupied area to lure them away. If you don’t mind disposing of dead beetles in the morning, place a container filled with slightly soapy water under the light as a trap. The soap breaks the surface tension of the water, so when the beetles land on the surface they sink and drown rather than floating. Use a vacuum with an extension handle to remove any beetles from the walls and ceilings in your bedroom before you go to sleep.

Make sure all screens and windows are properly sealed. Holes in the screen make it easy for false blister beetles to get into your home. Block off any cracks and crevices under doors and windows where they may be crawling in. These physical barriers don’t seem like much, but they can be extremely helpful in reducing the number of beetles getting into your home.

Chemical insect barriers such as Talstar and Home Defense have less efficacy against flying insects than they do for crawling insects, but if you notice a surface that seems particularly attractive to false blister beetles, you may try using one to dissuade them from gathering there. (Always read the product label to be sure you are using it correctly and in the right place!)

The beetle larvae live and feed on organic matter. Remove plant wastes from around your home and push back any compost piles.